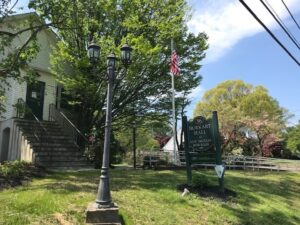 Edwin Burkart officiated at the laying of the building
cornerstone on September 13, 1913. Louise Burkart, his wife,
procured a donation of 63 books for lending. The Burkart Orchestra,
consisting of Edwin Burkart and his sons, Henry, Esher and Edwin
Jr., played at many Library concerts; and both Edwin and Louise
Burkart served on the Library board and participated in many of the
programs held at the Library. The next generation of Burkart’s,
Henry and Florence, also participated in many programs
and appeared in several of the plays staged at the Library.

Henry Burkart served his country in World War I. The son of Henry
and Florence, Bruce Burkart and his wife, Nancy, continued their
family’s tradition of service and citizenship through Nancy’s
tenure as Librarian, Bruce and Nancy’s volunteer work at the
Mercer Museum and Bucks County Meals on Wheels, as well as
Bruce’s service to his country during the Korean War, the many
hours he spent repairing and maintaining the Library building before
and after it was deeded to the Borough, his service as the Borough’s
first building inspector as an elected Borough tax collector for 24 years,
on New Britain Borough Council, as Judge of Elections, and many other
selfless acts of citizenship, including his current service as Borough
Historian.

It is clear why Council wanted to honor Bruce and Nancy
Burkart, as well as their ancestors, by renaming the building in
their honor.